You Down With ZPP Transcribed? | Collective Next

One of the recent Inauguration events (Beyoncé using a pre-recorded track while performing the national anthem) spurred a discussion on the concept of preparedness versus on-the-fly improvisation. In the midst of this discussion, we recalled Les Vygotsky’s “Zone of Proximal Development,” a widely used model by educators which refers to the point where one can effectively stretch his abilities and increase his capabilities. Taking that, and sliding over to the idea of preparedness, we realized that there is a window of optimal preparedness that lies between the edges of being over-prepared and under-prepared. In the case of musical performance, under-preparedness could lead to a pitchy performance, forgotten lyrics, tempo fluctuations. Over-preparedness could lead to those same outcomes, but also appears to manifest itself as a perfect pre-recorded track with which to sing along – an illusion or sorts. 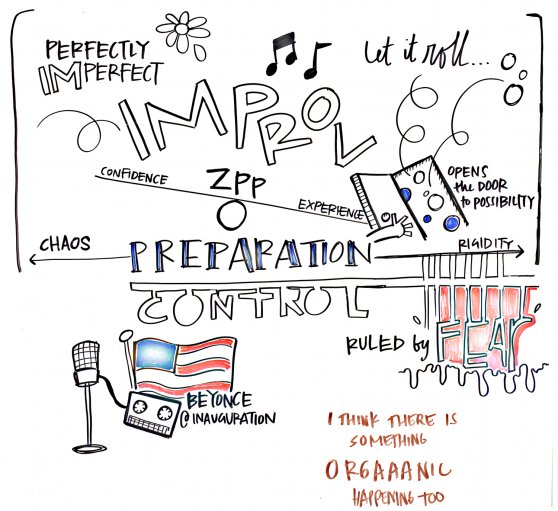 Taking this to our collaborative work practice, to be under-prepared means that you leave open the possibility for a chaotic situation to drive the participants of a workshop off the map, and lose sight of the intent of getting together for the workshop. As a practitioner of collaborative work, it’s best to have some level of ability to deal with situations and conversations that threaten the objectives of your workshop.

To be over-prepared could be defined as going so far as to script the entire workshop moment-by-moment, leaving no space whatsoever for those chaotic moments that might be beautiful moments. In our experience, it is often those un-scripted moments that lead to amazing insights within a group of collaborators.

So it seems there is a “Zone of Proximal Preparedness” (ZPP) when preparing for collaborative workshops. We all agreed that we feel this intuitively. The ZPP is a concept that really drives how much effort (time, research, etc.) you might need to put forward when preparing for a workshop. But how could you articulate that feeling? Our best articulation so far is that ZPP = situational complexity * (experience + knowledge).

Every situation is different, and it’s up to you as a practitioner of collaborative work to determine what the appropriate level of preparedness is. We posit that for each individual there is a ZPP where one is structured enough to effectively achieve a sponsor’s objectives and open enough to allow for the improvisation that helps you exceed them.