What Your Office Says About Your Company | Collective Next 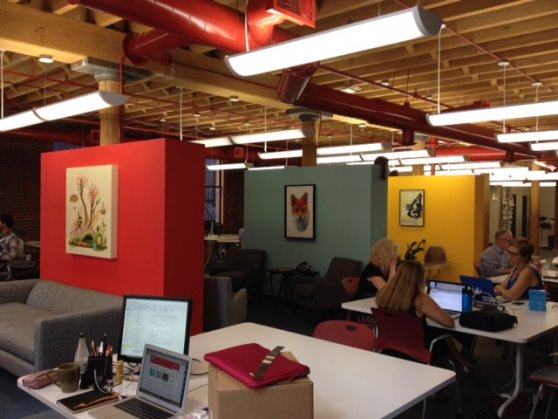 We’ve been following the conversation this week over at The New York Times about the relative merits of open versus closed offices.  The talk has been spirited, with many observations worth considering as you imagine the optimal design of your office.

Yet that debate, however spirited, is focusing on the wrong stuff. It has not landed on the core issue. Arguing open offices versus cubicles versus closed ones? That is merely a tactical question. The key strategic question above that is what kind of company do you want to have – and how can the design of your office support that?

At Collective Next, we believe in appropriate design, design that intentionally restates what’s important to an organization and makes it easier to do the work you want to do for the customers you want to serve. This is true when companies design their strategies, and it’s also true when you design your physical space. As with the many other ways organizations express their culture – stories and legends, rituals and practices, symbols and signs, predictable behaviors – the physical environment is a primary communicator of an organization’s culture and values. Without a word, it says this is how we work; this is who we are. If your organization values transparency, inclusiveness, and collaboration, then you should show it, live it, create conditions in which they will be more likely. You can structure your office in ways that great ideas will inspire one another. And regardless of which way you choose to design the office, the right way to get to the right office is by engaging your workforce to find out what they need. Top-down decisions are likely to miss some employee needs. As with so much else, explore this together and you will make better decisions.

There is no one office layout that works for everyone and open workspaces aren’t right for every organization. If your work is deeply focused, mostly solitary, requiring quiet contemplation and reflection, putting your people in loud, chaotic open environments won’t work. It will hinder both productivity and engagement.

But even the supposed downsides of an open environment, compared to a traditional office environment, can help companies in unexpected ways. One of the most common arguments we hear against open environments is that people who work there lose their privacy. That may be true, but there are two ways around that.

First, consider a mix. That’s what we have and we’ve seen elsewhere. Most organizations employ people who do many different types of jobs. The exact same environment doesn’t work for every position; call center work, for example, works best in the open, but even people who work in the open need some private space. Our environment is primarily open but there are still places to retreat. Conference rooms are for collaboration and communication — that’s why they’re called conference rooms – but they can also be places for occasional solo rumination. Our different conference rooms have different intentions. Some can be booked; some can’t. Some have couches, some have tables. We try to make sure that different private spaces offer different benefits. We believe that even the most collaborative person sometimes needs time by herself. That balance between closed and open gives your organization transparency and still permits a modicum of privacy.

Second, reconsider what you thought about the benefits of privacy. Open environments force you to have what used to be considered private conversations in public spaces. But that doesn’t have to be a recipe for employee embarrassment. Rather, it can be a chance for everyone to learn, and not necessarily at anyone’s expense. Indeed, you’ll find that the most open environments, if they’re done intentionally, are home to the most learning cultures. At their best, open environments are truly open.

The success of open (or mixed and mostly open) environments leads to a bigger point about human resiliency. Last weekend’s This American Life told the story of Daniel Kish, who’s been nicknamed “Batman.” Kish is blind, but he can navigate the world quite effectively by clicking his tongue (like a bat). As a result of his disability, Kish had to change the way he operated in the world, based on his physical constraints. He’s thriving now because he was able to adapt. It’s a great story about the role expectations play in performance and achievement.

It takes practice to become successful in an open environment. Many of us learned in schools that were hierarchical and lived much of our work lives in office environments designed for individual work rather than collaboration. That’s true even if the office has an open environment; dropping the walls is not sufficient. Entering a truly open environment can be disorienting and requires people to learn new skills (and let go of old fears).

Every environment speaks about the organization you are and want to be. Whatever office environment you host – open, closed, or some combination – do it intentionally and do it together with your workforce. As my colleague Dave Rutley notes, everything speaks. We believe open offices can work, but that’s not the main point. The main point is to remember that the way you work speaks loudly about what your company is all about.