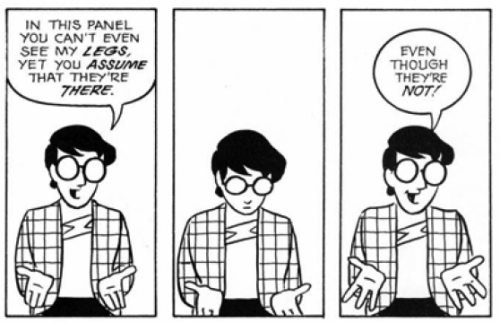 We’ll return to our cards and chronicling the recent TEDxBoston, but we’ve been on a bit of a reading kick lately (1, 2, 3), and here’s one last book recommendation, an old favorite that has proved useful on a current project here at Collective Next, before we return you to our regular programming.

You may not think a comic book can help you do your job better, but this one might. Inspiration comes from many places: other people, works of art, dreams, almost anywhere. Inspiration feeds creativity. At a time when creativity is so highly valued, it’s tempting to look around for tips.

It’s easy to get sick of books that seek to make you more creative. Some of them promise to teach you how to draw from a different side of your brain. Others maintain they’ll help you overcome your fear of being creative. It’s safe to follow the advice of screenwriting theorist Robert McKee. He argues that 90 percent of even what the best writers commit to the page is worth trashing so the only way to get to that worthy 10 percent is to write and write and write. Just put down the how-to books and write it out. The work of Seymour Papert at the Massachusetts Institute of Technology is grounded in the same notion: People learn by doing. It’s no accident that his academic chair was endowed by Lego.

For executives looking to break out of whatever creative box they feel is enclosing them, far more valuable than a how-to might be a book that demonstrates, celebrates, and inspires creativity. A great novel or a piece of nonfiction that opens you up to rethinking basic assumptions can do the trick. If you suddenly see things in new ways, you can suddenly respond in new ways, too.

At first, Understanding Comics by Scott McCloud appears to have a modest aim: to help readers figure out how comics work. But as the book progresses, it’s clear how ambitious McCloud really is. Published independently by Kitchen Sink Press in 1993 and quickly picked up for wider distribution by HarperPerennial, Understanding Comics offers a history of art, going back to preverbal times, illuminates how audiences complete what an artist begins, muses on the different needs artists have and the rewards the derive from trying to satisfy those needs, how humans create objects that look like humans even when we’re not trying, and does this and much more with wit, delight, and style. On almost every page, there’s an insight worth putting the book down and pondering, but you won’t do it (at least you won’t the first time you read Understanding Comics), because you’re having too much fun as McCloud grabs your hand and pulls you through. You won’t want to consider where you are right now for too long because what’s around the bend seems like it might be even more exciting.

As quick a read as Understanding Comics can be, it’s a book that rewards those who slow down. McCloud breaks down the form to its elements and shows why iconic images are more universal and effective than photorealistic ones. He explores the spaces on the pages and forces you to realize what you’ve been reading between the panels. In doing this, the book rises to a you-have- to-stop-for-a-moment-even-if-you-don’t-want-to meditation on, as he calls it “the desire to be heard, the will to learn, and the ability to see.”

I don’t want to leave out how funny this book is. Because it is itself an instance of comics as well as being about comics, McCloud can merge form and content. He places himself in the story, even in places where he doesn’t belong, so we can accompany him through the presentation, which is full of visual and verbal jokes. His excitement is infectious and his determination to share it by cracking us up is welcome. Often his humor is inextricable from his more serious messages, particularly in a section in Chapter 7 where he seeks to do nothing less than depict the invention of art—and show how much (and how little) has changed in the half-million years since.

Not everyone is interested in reading comics. But Understanding Comics might jumpstart you even if you think comics are all adolescent fantasies: It’s tightly structured, but the structure is so malleable that McCloud can jump anywhere he wants to, just for fun, secure there will be somewhere for him to land. Profound in spite of itself, which means profound without being pretentious, Understanding Comics celebrates, shows us, and tries to get to the bottom of creativity. For those millions of us who grew up on DC and Marvel, it lets us see something we’ve been staring at our whole lives in a new, deeper way. 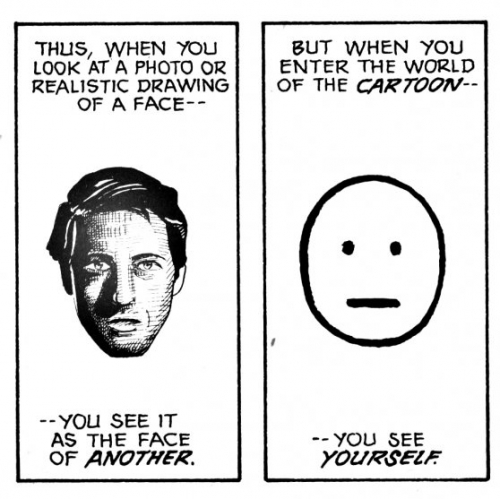 TAGS: creativity, innovation, inspiration, storytelling
Back
Create What's Next
We’d love to hear about the challenges and opportunities your organization is facing.