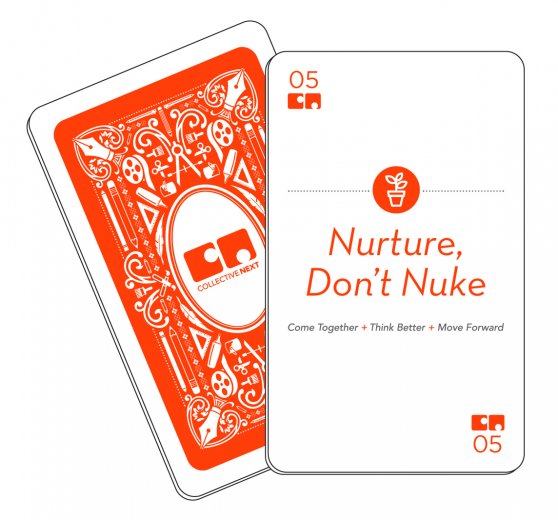 We’ve all been there: We’re in a meeting and someone has just said The Dumbest Thing We Have Heard in Our Entire Lives. Maybe we think the comment is off-topic. Maybe we think the idea doesn’t take into account areas in which the group has already reached consensus. Maybe we think the proposal doesn’t respect the time and budget we can devote to the issue at hand. Our responsibility, we think, is to push this out of the way so we can get back to the real work at hand. Just nuke it.

But what might seem off-topic or irrelevant might be spot-on if we let it develop. Business history is full of companies that have failed because they didn’t see the next thing coming, whether it was Decca passing on The Beatles, Excite missing a chance to buy Google for less than $1 million, or Intel deciding that the iPhone wasn’t worth developing for. They nuked the new idea, in large part, because those in power at those companies felt it was too different from their existing model. Signing The Fab Four, adopting a new search algorithm, or redesigning a chipset all would have required a company to do some rethinking. It wasn’t Christensen-style disruptive innovation, but it woud have been a noticeable change of course, either in tactics or strategy.

Decca, Excite, and Intel were all successful companies when they decided not to act on a new opportunity, so they felt it was safe to ignore ideas about how the future might be different because the present was so bright. Why change? When we see teams decide to nuke new ideas rather than nurture them, it’s often because that new idea challenges what works so well right now. But it’s when companies are doing well that new ideas can be discussed without desperation having a role in the decision-making. It’s when there’s time to test, fail, learn, and try again.

Every new idea won’t save your company or develop a whole new business. Only a rare few do that. Most of the good ideas will likely make your business more effective or efficient. But almost every idea is worth listening to and playing out, at least a bit. It might not take much nurturing to discover what a bad idea nuking would have been.