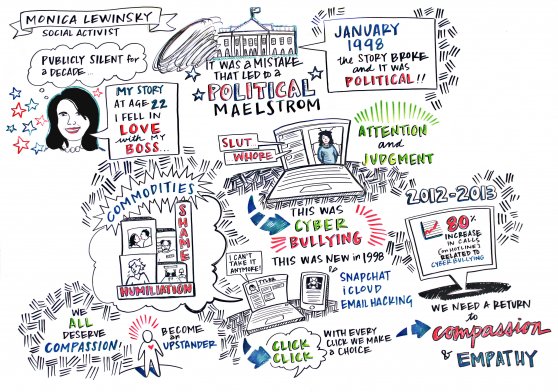 There were plenty of ideas worth spreading at TED this year, with big topics ranging from redesigning the experience of dying to building economic development around violence prevention. We will address many of them in this space in the weeks to come. But the talk that’s received the most attention so far, not surprisingly, has been Monica Lewinsky’s call for a more compassionate and empathetic culture.

Lewinsky’s headlining talk provoked a number of conflicting reactions, just as her abrupt and unwanted arrival in the public eye in 1998 did. On one hand, this was a very professional talk, perhaps overrehearsed to the point that the stories sometimes didn’t feel authentic, even though of course they were. And her prescription for what to do about cyperbullying and other awful online behavior wasn’t anywhere near as vivid as her recounting of her most terrible year.

Those were the parts of the talk that were riveting, undeniable. The story this extremely poised 41-year-old woman shared about her 22-year-old self, unprepared for such an unprecedented, global public shaming, cut deeply at times. Overrehearsed or not, there were parts of her talk when the woman who launched 10,000 bad beret cartoons come across as a real person, not a mere political symbol. Most scarring: when she discussed how, during the most acute weeks of 1998, her mother insisted that Monica shower with the bathroom door open because she was afraid her daughter might hurt herself.

Our Tricia Walker scribed the talk in real time, as you’ve seen above. We’ve embedded a video of the talk below.