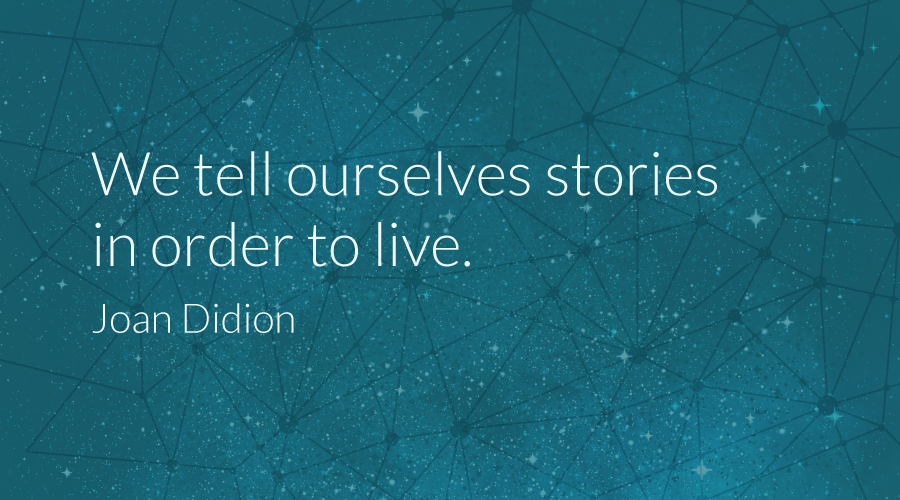 With the piece below we introduce a multi-part series entitled The Narrative Universe. In the coming months, we will explore how we humans construct our world, even our professional world through stories, myths and narratives.

Virtual reality is nothing new. It’s as old as the hills, and almost as old as our opposable thumbs. Tens of thousands of years before the advent of Occulus Rift and Google Cardboard, we homo sapiens developed a capacity and predilection for entering into a state of reality that is distinct from and yet parallel to our everyday reality. Entrance into this state requires no technology, no chemical compounds, not even special brownies. The only thing you need: A story.

When we human beings hear stories—in forms both high and low, Shakespeare and front stoop gossip—certain neurons begin firing off like crazy in our brains—and just like that, the psychic space of a virtual reality opens up in our mind’s eye. Suddenly, involuntarily, we not only picture the people and places in the narration but we feel what they feel, taste what they taste, desire what they desire. We may even come to love and hate the people we meet in stories, though we know full well that they do not exist outside the narrative universe. The better the storyteller, the more deeply we enter in, the more thoroughly we are affected. Sound familiar?

Because we begin to exercise this capacity for entering the virtual reality of the story from such a young age (Golden Books!), we don’t think twice about it. But if you do think twice about it, it’s freaking bizarre. Why did our species select for this capacity? Wouldn’t the unforgiving world of tooth and claw have bred this tendency right out of us? It certainly would have if our capacity to enter into the world of the story were mere child’s play, escapism, or entertainment. Clearly there is more going on here.

Findings in fields as diverse as cognitive science, evolutionary biology, clinical psychology and literary theory suggest that by focusing disciplined attention on our capacity for entering the virtual reality of the story we can begin to sort out some of the deepest mysteries of human nature. How we make meaning out of a chaotic universe, how we develop consciousness of self, how we cultivate ethical sensibilities, how we effect meaningful change in ourselves and in our institutions—all of these “hows”, it now seems, are tied up with our ability to enter into the virtual reality of a story.

It is increasingly clear that we have only just begun to understand this capacity; and we have only scratched the surface in our attempts to harness its effects.

Popular discourse around stories too easily becomes one-dimensional (likely because of rather than in spite of the multifaceted role of stories). A great deal of the literature on “harnessing the power of storytelling” treats stories as attention-grabbing strategies for keeping audiences awake during presentations and selling more stuff. These strategies are highly effective, to be sure, but do we want our capacity for stories to have survived the tooth-and-claw of adaptation only to be treated as the equivalent of Red Bull and fast talking salespersons? I overstate the point, I know.

But what we hope to do in this series—The Narrative Universe—is to bring insights from multiple disciplines into conversation with one another in order to arrive at a deeper, more nuanced understanding of our narrative capacity. In the coming months, we will engage path-breaking neuroscience and the best of narrative theory in order to tease out the multi-faceted nature of storytelling. We will explore the ways that our narrative capacity…

It is one of the contentions of this blog series that these explorations will give us insights into what is perhaps the most important question that we who work for meaningful change in the world must address: How do the unique stories of individuals (“this is my story”) interact most fruitfully with the overarching narratives of organizations, societies, and subcultures (“this is our story”)? How can the cohesion of “our story” survive the irreducibility of “my story”?

I’m guessing that to get to the bottom of all this we’ll have to sort out what the heck Joseph Cambell meant when he stated: “Myths are public dreams, dreams are private myths.” How’s that for a cliff-hanger?