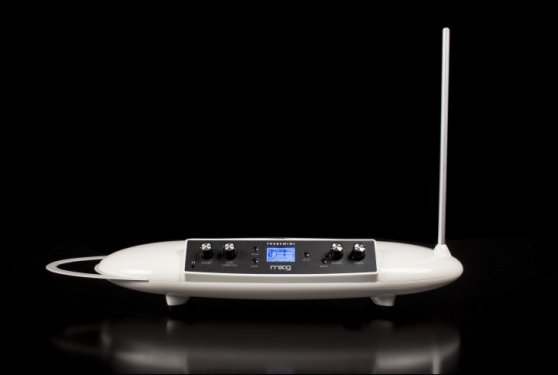 The first time I ever saw a theremin was from the cheap seats in Madison Square Garden in 1977, as Jimmy Page waved his hands over the device, half magician, half completely-out-of-it musician. I could hardly see it (this was before there were big screens at arena shows). But I was intrigued. After the show, I learned what I could about this strange instrument that made sounds based on the movement of your hands. You never came in contact with it. It was most exciting because it was, literally, summoning music out of thin air.

Over the years I learned more about the history of the device and I also became a mediocre theremin player myself. It was an extremely difficult instrument to master, for a number of reasons, but the primary one was that you had to have excellent body control to generate music rather than noise. A small movement of your fingers, maybe a bit more than an inch, could change the note you hit by almost an octave. It was like the old Seinfeld joke of taking a shower in an unfamiliar hotel, moving the dial 1/16 of an inch, and have the temperature of the water change 10,000 degrees. I became a borderline-competent theremin player, able to hit the right notes enough of the time not to embarrass myself, but I never mastered it.

I haven’t played much theremin for a decade, but I have started playing a new model that has made me rethink a lot I thought I knew about art, learning, and working together (three of the topics we talk about the most at Collective Next).

The new theremin, the compact Theremini, comes from Moog Music, in Asheville, N.C. (The theremin I learned on was a Moog Etherwave. Moog Music is best-known for its synthesizers, but its founder and namesake Bob Moog started out selling make-your-own-theremin kits via classified ads in the back of electronic magazines.) The Theremini has a similar hardware design to the “traditional” theremins that Moog sells and has some welcome software additions, but it is different from every other theremin you’ve heard in one very important way: it solves the crucial problem of hitting bad notes. A Pitch Corrector dial can make the Theremini work like a standard theremin, but if you turn it all the way up it’s nearly impossible to hit a bad note. It’s like AutoTune for theremins. It helps non-experts play songs that sound like songs on the theremin within an hour. With previous models, if my history is any indication, after a mere hour of use a theremin produces only noise. (Not good Ornette Coleman noise; bad I-can’t-get-this-to-work noise.)

When considering art, many people put down someone’s work by saying it’s facile, or too easy. If it’s that easy to make, the idea goes, how could it be art? That often happens when new technology gets introduced. That was the case long before Photoshop or word processors. Truman Capote once derided Jack Kerouac by saying, “That’s not writing. That’s typing.” I know that sometimes artists have to suffer for their art, but do the tools have to make them suffer, too?

Theremin purists (yes, those people exist) hate the Theremini. They say it’s not a real theremin. By some definitions they’re technically correct, but I think what worries them is that the Theremini makes it easier for people to become competent theremin players. And that means playing a theremin won’t be this special skill that only a few chosen know how to do. I doubt there will be an avalanche of new players, but I do believe that a larger percentage of those trying to learn how to play a Theremini will stick with it. Perhaps the genius part of the Theremini is that the Pitch Corrector is an adjustable dial rather than an on/off toggle. You can play without assistance, you can play with complete support, or you can find any place in between. The Theremini makes it easy to start learning, but it also makes it easier to get better (and in less need of assistance) at your own speed. It lets you customize the difficulty to your aptitude and desires.

What does this mean for learning? What’s most exciting about the Theremini is that it makes possible something that was previously extremely difficult. (And not just for the learner. It might have been funny watching me and my gestures as I learned the theremin, but I’m sure it was borderline-painful to hear.) People perform better when they have a feeling that they’re developing mastery; the faster they get that feeling, the more they’re likely to stick to the task. Think of the new skills you need people on your team to master. Do the current tools make learning that new skill unpleasant? Are there tools that would get them where they need to be faster and easier?

I think the Theremini has a lesson to teach about collaboration, too. You don’t have to know everything about a topic to be an effective collaborator, but the more you know and the better you feel about what you know, the more you can contribute. Tools like the Theremini provide shortcuts to being a viable contributor. I don’t think these tools make you a true expert that much faster than the old way, but they do allow you to create something worth sharing that much faster. And if you’re truly collaborating, you don’t have to be an expert to be a useful contributor. You don’t have to know everything. Tools like the Theremini help people discover a shorter path to being part of a conversation that can help everyone. It’s also a lot easier on the ears.