First, let me state for the record that I am not a Luddite. I am in fact a proponent of the nascent but rapidly evolving practice of virtual collaboration. I like technology, and innovation. And I believe that eventually, when the technology and available bandwidth catches up, there will be truly extraordinary power and value in virtual collaboration. Take advantage of the 24-hour clock. Keep costs down. Save the planet.

But today, even with the reality of our grim and uncertain economy, even with volatile oil prices pushing travel costs into the stratosphere, if the objective of your collaborative work is inspired innovation, then large group, face-to-face collaborative work sessions are both more effective and more efficient than virtual collaboration.

In his 2006 book The Organization and Architecture of Innovation: Managing the Flow of Technology, Thomas J. Allen, professor of management and organization studies at MIT, categorized three types of communication:

Allen writes, “In an organization that relies on creative solutions to problems, communication for inspiration is absolutely critical. It is usually spontaneous and often occurs between people … [drawn] from different disciplines. …

“…Most communication of this type occurs during chance encounters, which create the possibility for inspiration and creativity—the sources of innovation. It is very obvious that the ways physical space is configured can strongly promote or impede the occurrence of chance encounters.”

Virtual collaboration, by its very nature, impedes chance encounters. Even in the best of cases—even with unconstrained access to a Cisco or HP telepresence suite, you still have to schedule the encounter. And then it is usually only a point to point experience, and a highly mediated one at that. And the mediated nature of the encounter creates impediments of all kinds.

I once traveled to a client site for a half-day session via Cisco telepresence. During that session, not only did my lead client on the far end begin the meeting behind his laptop, but part way through the session he got up and left the room. (If he was having chance encounters, they were outside of our collaboration.) When he returned, he had an additional laptop that he plunked down next to his other computer. So even though the telepresence technology did a pretty good job presenting us all at human scale to each other, and even though I could more or less look into my client’s eyes, he spent most of the session looking at one or the other of his laptops.

People sometimes have to step away from meetings. It happens. And open laptops and mobile devices are nearly ubiquitous in today’s business meetings. I get it. But this was a collaborative work session for which the client was paying a significant fee. One has to wonder whether the mediated nature of the experience gave him license to interpose not one but two computers between us and to get up and leave the room when something apparently more pressing arose.

Virtual collaboration, as valuable as it can be, impedes face-to-face chance encounters. And chance encounters contribute mightily to the efficacy of collaboration efforts aimed at inspired innovation. Brian Muirhead described this phenomenon in The Mars Pathfinder Approach to “Faster-Better-Cheaper”: “We used all forms of electronic information exchange, especially email and voicemail. It all helped, but something special happens with face-to-face communication. Chance encounters while just walking down the halls often resulted in valuable insights.”

I began by asserting that large face-to-face collaborative work sessions are both more effective and more efficient for certain types of work. Let’s talk about the efficiency.

A couple of years ago, Michael Paulson, a colleague from CS Technology introduced me to Metcalfe’s law. This wasn’t just some geeky moment of continuing education. Michael and I had just concluded facilitating a successful two-day, 40-person collaborative work session, and he used Metcalfe’s law to describe one of the values that he had observed as inherent in the process of bringing those 40 people together. 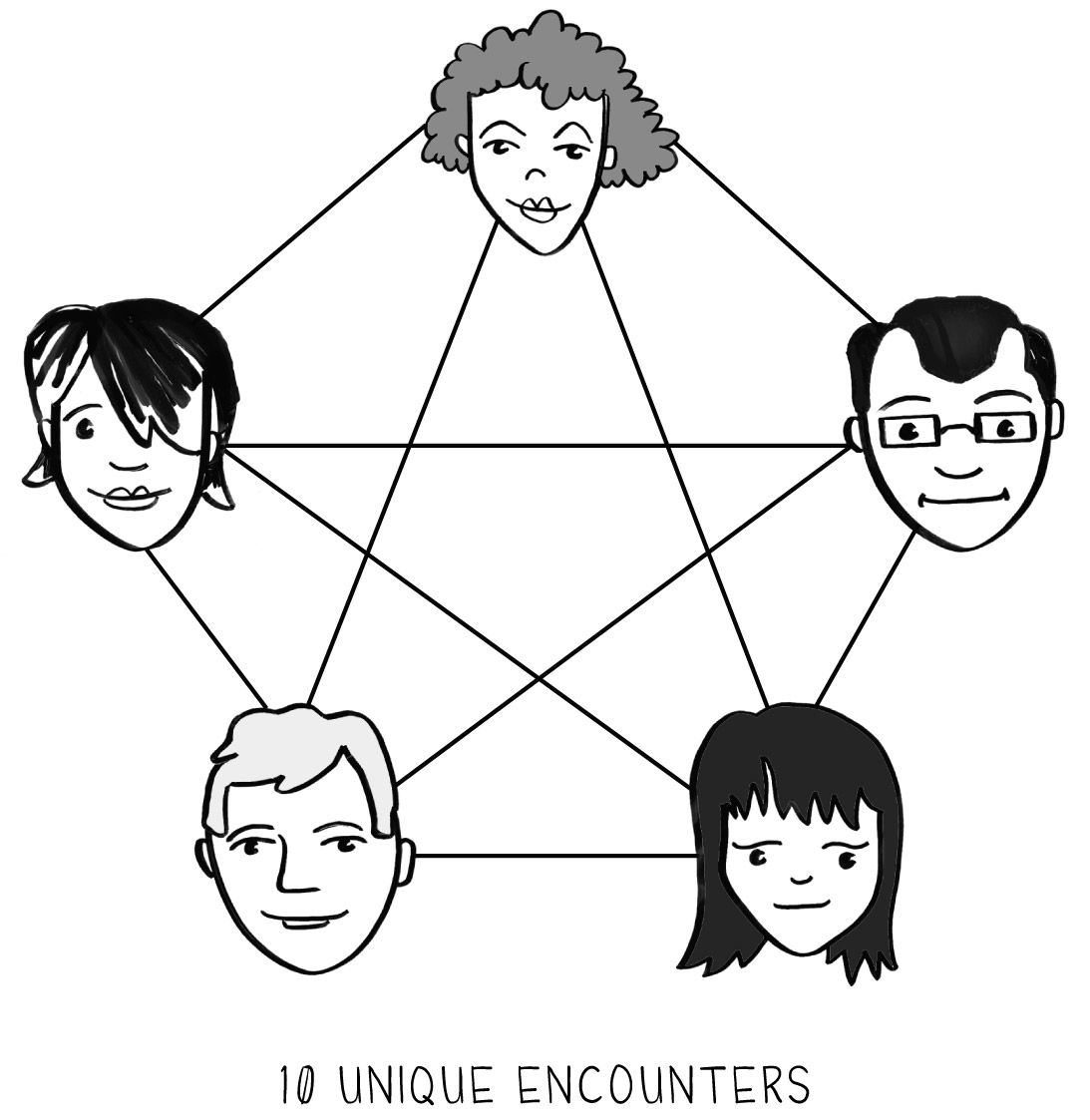 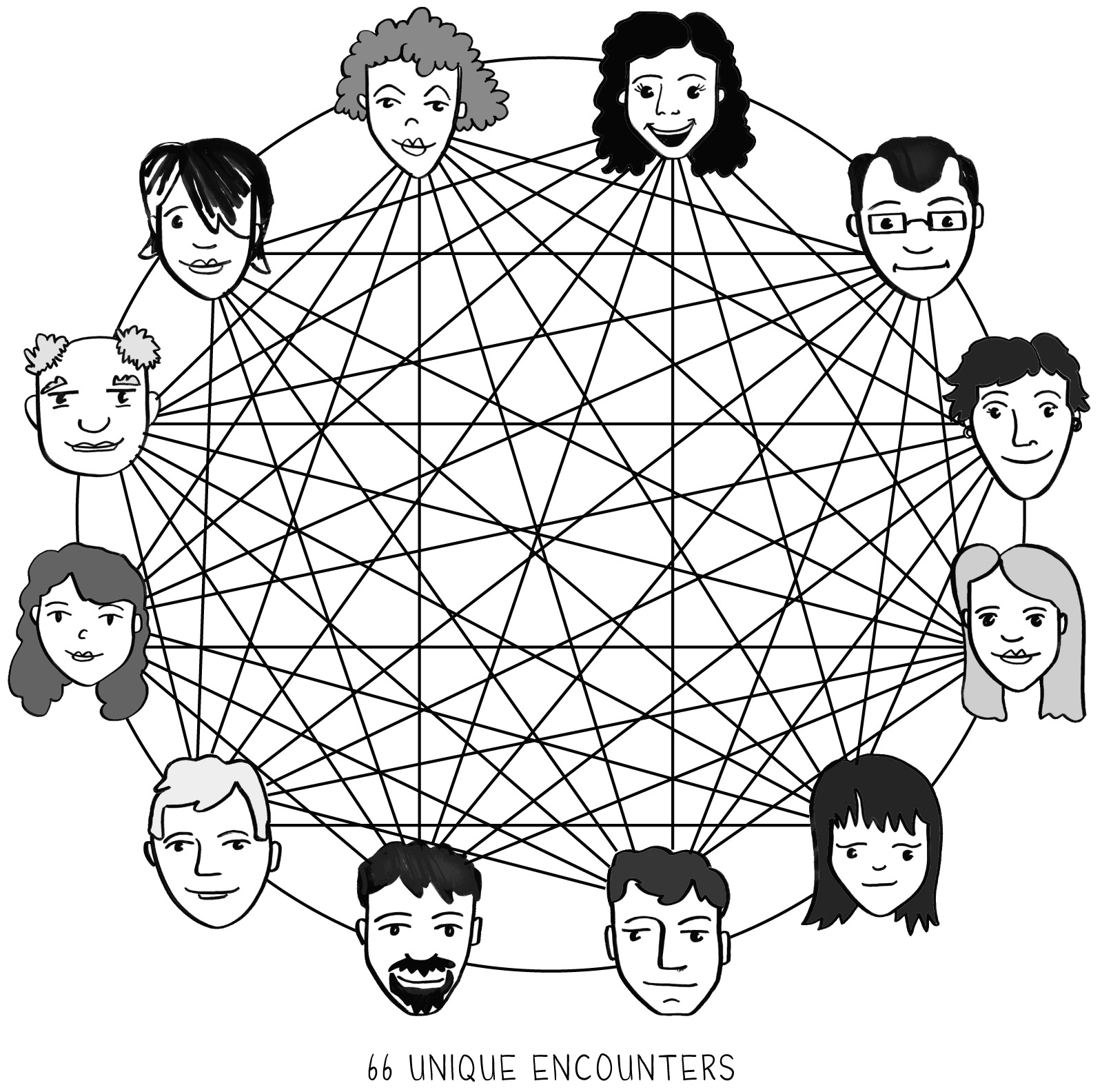 When you consider Allen’s findings and Metcalfe’s law, it becomes clear that large, face-to-face collaborative events offer exponentially more opportunities than virtual collaboration for the kind of face-to-face interactions that drive creativity and innovation. Bring people together; apply a rigorous process and opportunities for chance encounters; capture the results; and maybe, just maybe, change the world.