Every Friday, we here at Collective Next attempt to practice what we preach and gather together to think better and move innovative ideas forward. Today we were inspired by this TED Talk by Terry Moore describing his epiphany regarding the best way to tie your shoes.

Terry Moore bought an expensive pair of shoes, yet the shoelace kept untying. The salesman informed Moore that he was tying his shoe incorrectly. As a the director of The Radius Foundation, which “seeks new ways of exploring and understanding dissimilar conceptual systems or paradigms with the aim of achieving a worldview of more penetrating insight and richer innovation”, Moore assumed he has mastered the skill of tying his shoe.

As he so articulately states, assumptions can often stand between individuals and progress. 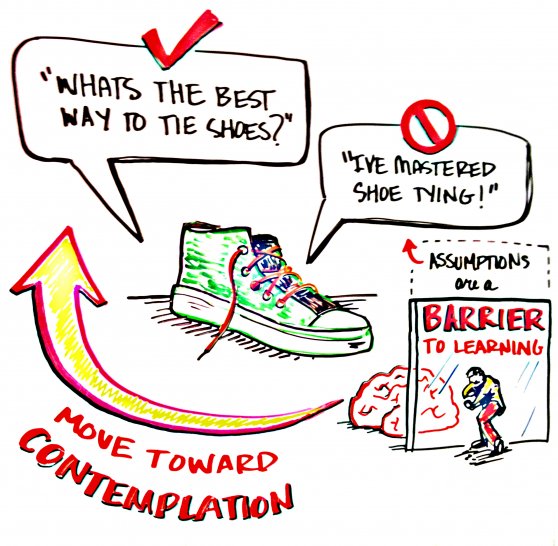 Edgar Schein, a former professor at the MIT Sloan School of Management who is credited with inventing the term “corporate culture”, posits that assumptions are a key inhibitor of organizations, as well. According to Schein, shared assumptions define organizational culture and are the source of organizations’ values and actions. Thus, individuals and organizations that do not address their shared assumptions may be facilitating values and actions that do not accurately reflect or promote their desired vision. Similarly, if you do not question even your every day processes, like tying your shoe, you may miss an opportunity for significant innovation.

Actively questioning your assumptions will help align your values, actions, and vision, facilitating the process of achieving excellence. Yet, not all individuals and organizations are aware of or desire to question their assumptions.

Psychological researchers, Prochaska and Diclemente, posited that when people consider any change, especially one that involves altering imbedded habits and beliefs, they progress through stages. In the first stage, precontemplation, an individual does not recognize the need for change. After becoming aware of other options, an individual enters contemplation and considers change. Next, he or she prepares to act. This stage is followed by the performance of the change and finally, the maintenance of the change.

Individuals and organizations in precontemplation have not yet recognized that they are tying their shoes incorrectly.

We confront people and organizations in each of these stages of change in our work at Collective Next and we have recognized there is a delicate balance between facilitating someone’s successful progression through them and forcing someone to change. An individual must decide to change for it to be effective and reflection is a key driver of the decision making process. When a person is helped to recognize his options and accurately reflect on the pros and cons of them, he often makes a decision that progresses them toward excellence. For example, when an addict is helped to objectively consider the pros and cons of continuing to use drugs, she is forced to reflect on her assumptions, confront her emotions, and make more informed decisions. This process often results in the decision to change the ineffective behavior.

We can also illustrate the thought of how to engage someone to move beyond assumption, and embrace a new perspective through the practice of teaching music. When a student is unable to perform a passage of music, he’ll say things like “I can’t do that!” or, “It’s really hard to get that part to sound right.” An effective change agent (the teacher) will meet the student where they are by playing the troublesome passage to the student the exact way the student is playing it. Then, the teacher will make just one modification either expressively or technically to show the student how they can make their performance better. By putting the student in the listener’s seat, letting him hear the before/after, and letting him visually see how that change was made (and the technical motions required to make it happen), a student is likely to get excited by that, and be able to push to that next level of performance. The teacher aides the student in the “contemplating” phase so that he can see into the future, and know what success will sound like.

This is not unlike any other discipline that requires consistent practice – whether it be musical performance, sports, or collaborating with colleagues in any one of a number of fields. A little nudge to able to get beyond the assumption of “I know the best way to do that,” or “That’s simply too hard for me to do,” is all a lot of us need. By meeting your colleagues where they are, and being open to their perspectives and experiences, a group collaborative experience has the greatest potential to achieve something remarkable.

Those are the thoughts we transcribed this afternoon. What are yours?