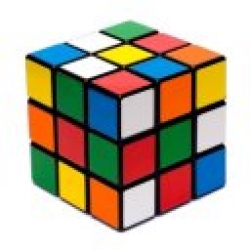 Either you could do it or you couldn’t – simple as that.  Maybe you happened upon the six sides in alignment once or twice but weren’t sure how you got there.  You most assuredly achieved one-sided alignment in a relatively short period of time but perhaps gave up the rest after 20 minutes of frustrated twisting and turning.  Regardless, the Rubik’s Cube, invented by a Hungarian named Erno Rubik in 1974, captured the minds (and time) of people around the world in the dogged pursuit of its solution.

While the puzzle itself has seen its popularity rise and fall, mostly in the mid 1980’s, the lessons embedded in its engineering design, its ‘problem’, and ultimately its almost unattainable solution makes it a great analogy for organizational development today, 36 years after its launch.  Making an abstract connection from a plastic puzzle to the talents strategy in a complex organization may seem simplistic in its approach.  However, transforming the points and lessons to a wellness check against existing initiatives may spawn new thoughts about your talent strategy than perhaps previously considered.

1.  Fixed Core.
One can’t help but think of the concept of “Preserve the Core / Stimulate Progress” found in Built To Last (Collins, J. and Porras, J. HarperCollins 1994).  The notion of identifying an organization’s core ideology, an enduring purpose that does not change, is the hidden part of the Rubik’s Cube, not seen unless the puzzle is taken apart and viewed with a piece or pieces missing, or at the initial construction of the toy. The genius design of the core allows all pieces to pivot freely around it while remaining directly attached or through an anchor point.  Lesson: The vision and purpose of the organization should drive the Talent Management Strategy and initiatives; All objectives should be somehow linked to the core; Everything around the core may change into new combinations but the purpose will remain the same.

2.  Six Anchor Points.
For successful talent trategy, the following six elements must be in place with some degree of permanence: People, Process, Technology, Vision, Accountability, and Skills.  Since the puzzle solution calls for alignment around these anchor points they act as guides for progress and help to benchmark success.  The more mature the solution progress, the more difficult it is to re-align each particular anchor point.  Lesson: Make sure the six core elements are in balance using a ‘balanced scorecard’ approach; Be sure to put them in place early in the solution process; Use them as guides along the way to check progress.

3. Individual Pieces.
Each individual piece is fundamentally the same in structure and size, but differ in color combination and orientation to the core, be it a corner piece, anchor point or side piece.  Like the people in the organization, they see the core vision differently and align their actions as such.  They are the most flexible elements of the puzzle and can align themselves closer or further away to any anchor point but in themselves share a proximity in color to one particular anchor point in the solution.  Lesson:  Align to individual strengths; Remain flexible; Seek change and renewal; Remember your uniqueness; Define and stand by your anchor points.

4. Element of Enjoyment.
The Rubik’s Cube is generally found in the toy section of the department store along with all the other games and fun things meant for kids and playful adults.  Although puzzles can in themselves be frustrating, the joy of the Rubik’s Cube lies in the process of finding the solution.  As Benjamin Hoff points out in his book The Tao of Pooh (Penguin, 1983) “There was a moment just before you begin to eat the honey which was better than when you were eating it, but Pooh didn’t know what that moment was called.”  Lesson: Enjoy the process; Inject fun into learning; Incent individual contribution aligned to enjoyment; Try not to take yourself too seriously.

5. Frictionless Change.
There are 4.3 x 1019 possible combinations on the Rubik’s Cube, but only one solution.  It is remarkably easy to shift position and be in alignment with a new set of colors surrounding each piece.  If a position is wrong in regards to progress towards solution it is easily identified and corrected.  Sometimes change to reverse progress is needed in order to make further advancement towards the solution.  Lesson: Flexibility is key to successful talent management as most organizational learning is not prescribed but is stumbled upon by doing the work itself;  “Branching and Pruning” (Built To Last) is key to keeping what works regarding Talent Management  initiatives – not all of them will.