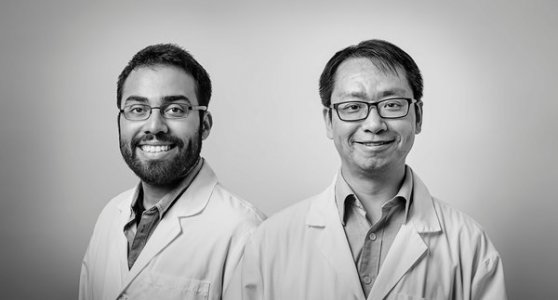 We are very sorry to note the passing last month of Xu Liu, who had just begun working as an assistant professor of neurobiology at Northwestern University. We at Collective Next had the great pleasure of working with Xu and his collaborator Steve Ramirez, when they were both at MIT, on a pair of TEDxBoston talks chronicling their groundbreaking brain research. Xu was brilliant, of course, but he was also funny and far too humble. Art director Evan Wondolowski worked with them most closely; their collaboration led to a presentation that was entertaining, provocative, and clear. (Evan also contributed illustrations for some of their subsequent journal articles; one is at the bottom of this post.)

In “Brain Inceptors,” delivered at TEDxBoston 2013, they reported on the research that led to them being awarded the 2014 Smithsonian American Ingenuity Award in Natural Sciences. They showed how they used lasers to implant false memories in mice and discussed the ramifications of their work.

In “Activating Positive Memories,” from TEDxBoston 2014, the pair summarized what they had learned since the first talk, emphasizing the ways in which this research could improve the lives of both mice and humans.

This is a terrible loss. At Collective Next and TEDxBoston, our thoughts are with Xu’s family and Steve Ramirez.

TAGS: TED
Back
Create What's Next
We’d love to hear about the challenges and opportunities your organization is facing.