Listening for Poetry | Collective Next

Below is the second installment in our series, Leading by Listening. In this series we explore multiple facets of listening and its role in organizational leadership. The following interview provides insights into a unique process for incorporating listening into a collective context via poetry.

When is the last time a kindly stranger approached you on the street, asked “Would you care for a poem?”—and 30 minutes later handed you an original poem, with echoes of your own heart and soul in it? Chances are it was the last time you walked down Chase Avenue in Cincinnati, and more than likely the kindly stranger was Mike Fleisch. Fleisch is a Founder and Board Chair of Chase Public, an organization dedicated to promoting “empathy through creative practice.” Since its founding in 2011, Chase Public has hosted numerous collaborative, artistic events. Today, I had a chance to chat with Mike about the unique role of listening in achieving the creative and empathetic spaces that have become the hallmark of Chase Public. We began our conversation by talking about the short-order poetry mentioned above.

MD: What is short-order poetry all about?

MF: Short-order poetry is a practice in which we rapidly produce a poem out of a short conversation with someone. We were initially inspired by a collective in Miami doing this type of work, but it is occurring elsewhere as well.

MD: What does the short-order poetry process look like for Chase Public?

MF: Once someone agrees to participate, we start with the question, “What would you like your poem to be about?” We then talk to the individual for 5-15 minutes– sometimes it’s very emotional. Next we hand them a ticket and tell them to return in about a half-hour to collect their poem. The interviewer/poet then sets about writing the poem–people do it directly on a typewriter, some draft it in a sketchbook first, but it is all very low-fi. Once the poem is complete we hang it on a clothesline to be collected.

MD: It’s striking that you are able to generate such meaningful content out of very brief conversations with people who you are meeting for the first time. You must have to listen in a very deep, condensed way during the 5-15 minute interview portion.

MF: Chase Public has foregrounded listening as central to short-order poetry. We believe it’s what makes it work. Because we start with the simple question, “What would you like your poem to be about?” we have to follow wherever the response leads and find what makes it meaningful for both parties. It is a privileged space and time.

MD: Can you give an example of what might go on in such a privileged moment?

MF: We worked a session at the Cincinnati zoo for child cancer survivors. There was a little girl who had no idea what she wanted her poem to be about. Finally she talked about princesses. She said she loves an “oh my gosh there is a princess moment” meaning when she sees someone dressed as a princess at a party or a park. That ended up being last line of the poem about this girl who had dealt with so much and done so with such grace: “Oh my gosh, there’s a princess.”

MD: You establish a deep level of trust in a short time, is that accomplished through the way you listen? The initial question is simple as you say, it doesn’t necessitate going deep, and yet people seem to do that.

MF: People often find themselves facing the choice of whether to go down the funny road or the serious road and we let them choose…more often than not, given a fork in the road people chose something more personal and meaningful. I think the willingness to go deep is facilitated by how we listen and also by people’s desire to participate in the creative process.

MD: Have you found that listening is about more than just hearing the words people say?

MF: We listen on a literal level for content and language we might weave into the poem. We try to find words or phrases that might become something poetic, might do more work than originally intended. We also listen to the individual’s “energy” – that which is being communicated without words, the tone, the body language, the eye contact. When we write the poem we seek to capture the individual’s energy. That can only be accomplished by this multi-level kind of listening; we have a small group of really amazing listeners and writers.

What is it like to work with an organization versus in a public setting? Do you face different challenges getting people to open up in a corporate setting for example?

MF: At the request of one CEO, I interviewed him onstage in front of his whole organization. I was wary going in, but he was amazingly open. He talked about where his drive came from and some difficult things for him as a child. He was on the verge of tears. It was a moment of vulnerability that was not designed or planned. Five or six of us took the notes during the interview and then collaborated on the poem. Twenty minutes later we read it back to him on stage. It was a really powerful moment.

MD: You once created numerous short-order poems with and for the City of Cincinnati. In this project, listening to and creating poems out of the deeply personal stories of the residents of the city, created a compelling portrait of the community as a whole. Does this hold true in an organizational context?

MF: We worked with a newly formed company here in Cincinnati that was looking to actively define their culture. As the leaders of the organization looked across the poems that had been created, they were able to glean both what was meaningful to individuals in their community and whether some of their efforts to-date to define cultural values had resonated.

MD: You also encourage members of the community to listen in on themselves.

MF: As the poems are completed we hang them along a clothesline. This creates a gallery people can walk through thus taking in the voices of their friends, neighbors, colleagues. We also often have opportunity to create and share what we call a meta-poem, a single poem that represents a synthesis of all of the individual poems from a given session.

MD: You have talked about the resulting poems as a gift. I know you never charge the interviewee for the poem—but I am wondering if being deeply listened to about something important is also a gift?

MF: Often when people reflect back on the experience that is what they focus on. The validation is then getting the poem back and feeling you were indeed heard in the way that you hoped. The desire to be heard is nothing new; it is ancient and uniquely human.

*Chase Public is proud to credit the Pixies for their role in its founding, as it was en route to one of their concerts that the idea for the organization was born. 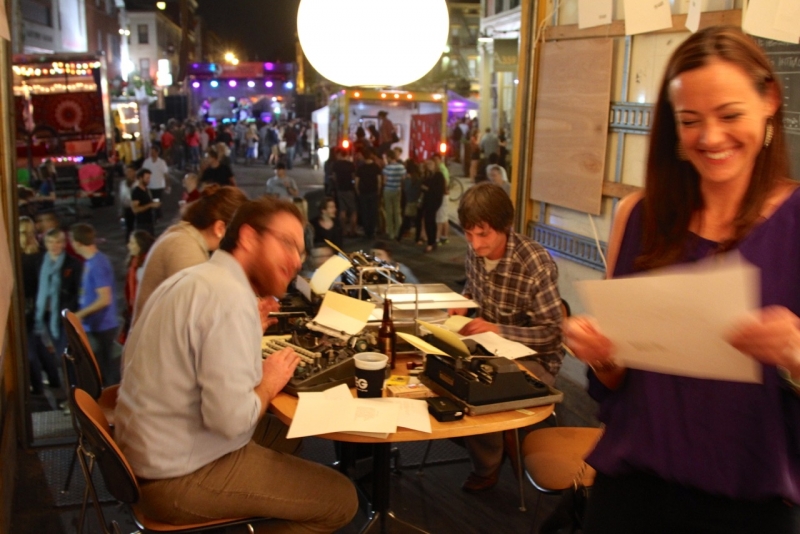 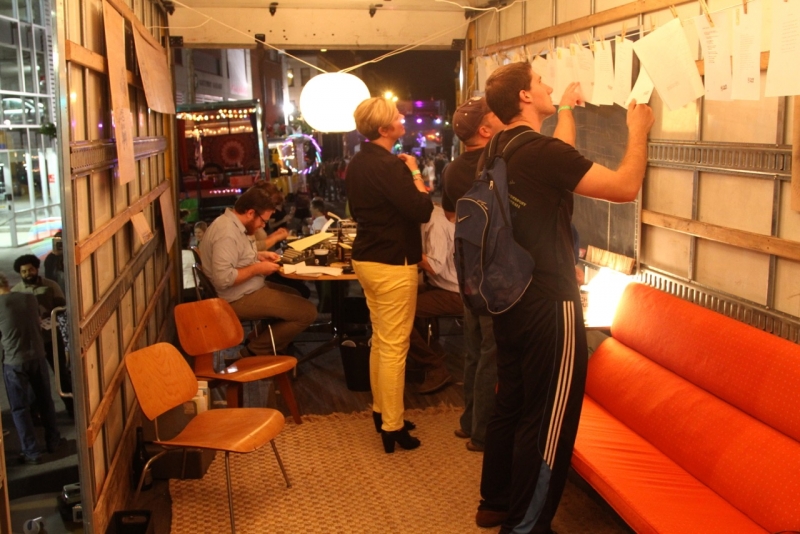 TAGS: Leading by Listening, listening
Back