We kicked off the year promising to deconstruct the process of meaningful change. And we noted that meaningful change requires designing strong and intentional solutions to address business challenges. Below is the seventh installment in our current series that focuses on how we support this design process through Collective Creativity.

Let me take a wild guess: you work with other people. (Not bad, right?) Okay, here’s another one: You do a lot of thinking for your job, and most of the time, you think about ideas. (How am I doing?) Okay, last one: you are often compelled into a group to think with other people. And when that happens, the expectation is that you will be creative, outside the box, and that you will deliver an innovative “big idea.” (Pressure, right?)

The catch, as you and I both know, is that  just because you tell a group of people to get together and innovate, doesn’t mean they will be able to generate any viable ideas, let alone earth-shaking ones.

As we noted in our series opening, collective creativity and innovation are a little like precious metals—their value derives from their scarcity, from the fact that they are hard to come by. But as we also pointed out, we can establish a “set of conditions that increase the likelihood of collective creativity showing up—on its own terms.”

One of the more tactical approaches I’ve taken as a facilitator is to use an activity called 7x7x7. The title refers to the structure of the exercise—seven rounds of seven minutes each worth seven points.

The exercise relies on the value of collective problem solving—of leveraging the wisdom of the group to generate, hone, and prioritize a set of ideas. Further, because the only way to turn an okay idea into a great idea is to keep refining it—this activity harnesses diverse perspectives and parallel processing to do this in an accelerated fashion. With this context in mind, below is a user’s guide to executing the 7x7x7 activity. 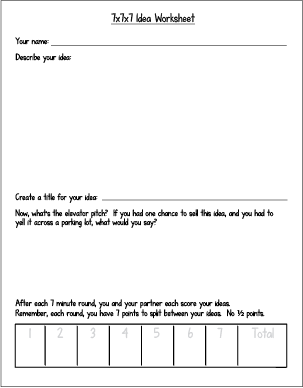 Step Three (7 rounds at 7 minutes each) 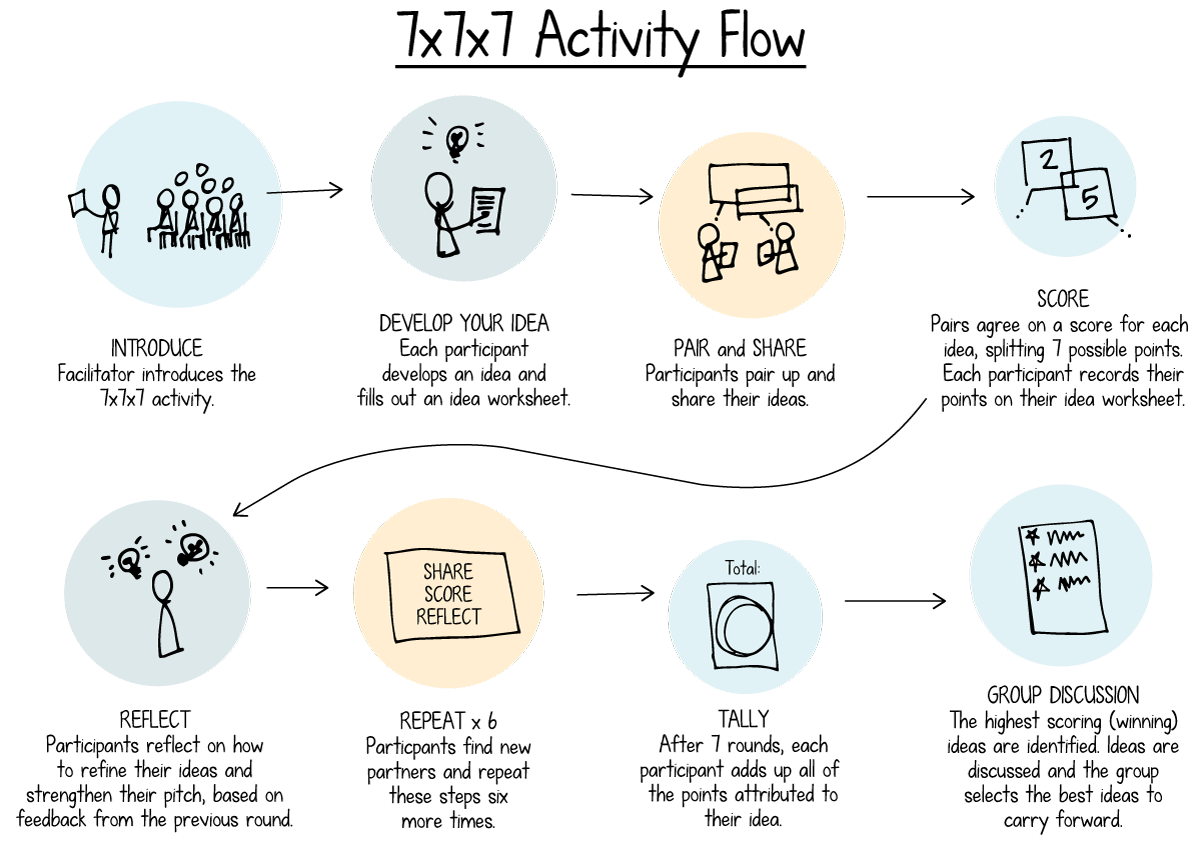 Some Final Thoughts
Two important facilitator notes to keep in mind: First, this activity is susceptible to the louder, more charismatic voices in the room. Encourage the participants to focus on the merits of the ideas rather than the slickness of the pitches. Ask them to be objective—and honest—about the ideas. Second, the activity is invigorating, but it’s also taxing. Pay attention to the energy in the room and encourage people to stay focused and to continue to evolve their ideas.

Last, remember that to realize the true value of this exercise you will need to continue to test and nurture the choicest ideas that emerged.

Give it a try and let us know how it goes.