Inspired by Chuck Berry | Collective Next 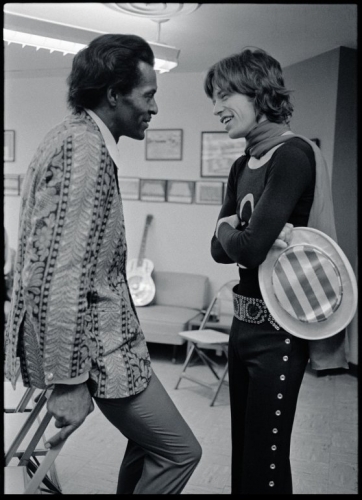 Chuck Berry is one of the finest rock’n’roll songwriters ever. Here’s how one of his worst songs inspired a classic.

A while back, I accidentally friended on Facebook Bill Wyman, the former bass player for the Rolling Stones, instead of Bill Wyman, the rock critic, the person I meant to connect with. Didn’t seem like good karma to unfriend the guy who played bass on “19th Nervous Breakdown” and several dozen more of the greatest songs in all rock’n’roll so I stuck around. Mostly his Facebook page offered tour dates, although he would occasionally touch on photography, archaeology, his books (did you know he wrote seven?) and setting scores.

Recently on Facebook he turned to a regular topic for him: his assertion that it was he, and not Keith Richards, who wrote the glorious riff of “Jumpin’ Jack Flash.” He mentioned that the inspiration was “an obscure Chuck Berry single I had called ‘Club Nitty Gritty.’” (He may have mentioned this in Stone Alone, the only one of his books I read, but it was really long and it was only a seven-day-limit library book so I probably read it too quickly and I don’t remember.)

I won’t wade into Wyman’s claim about authorship, but I do want to go on a bit about Chuck Berry’s “Club Nitty Gritty.” There are two reasons it’s obscure (Wyman is surely right about that). One: it’s not very good, a lazy list of dances that could turn Alvin Ailey into a wallflower. Two: it appeared as the last track on what may be Chuck’s worst-ever record without a song about his ding-a-ling on it: Golden Hits, a 1967 collection of mediocre rerecordings of his early triumphs, plus “Club Nitty Gritty” buried at the end as a booby prize. So the song’s not very good and it deserves its rarity status. Only deeply committed Chuck Berry fans, like the Stones, would have heard it. And it does boast a riff that could be an antecedent of the brutal “Jumpin’ Jack Flash” theme. Whoever pulled that riff out of the air took something shapeless and built a universe out of it.

The lessons here? You can find inspiration anywhere, not only in canonical classics but in trash. And pay attention. The next piece of crap you hear may make your career.