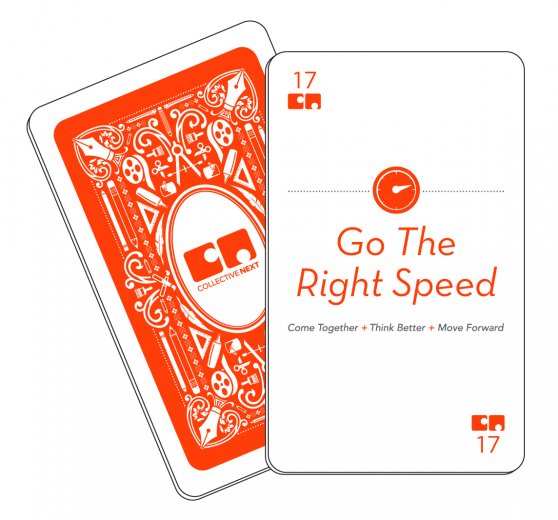 “I took a speed-reading course and read War and Peace in twenty minutes. It involves Russia.” ― Woody Allen

Chances are you have a long-standing relationship with speed. (I’m referring only to the property of moving bodies, not pharmaceuticals or any movies starring Keanu Reeves, Sandra Bullock, and a bus.) Most of us have been worrying about speed since we were young. Maybe you were the fastest kid on the playground. Or maybe you wanted to be. After you outgrew your first bicycle, you likely graduated to a bike with speeds. When you learned to drive, what did you have to negotiate? Speed limits.

We’re biased when it comes to speed. Generally — at least in our work — we are biased toward higher rates of speed. Go faster. Show a sense of urgency. Speed to market! Speed is good, until it’s not. Because, then, you know, speed kills.

Physics refresher: Speed was first measured by Galileo Galilei in the late 16th or early 17th century. He’s credited with articulating it as the distance something travels per unit of time. So speed implies motion. An object at rest, traveling no distance, has a speed of … anyone? Anyone? … Zero. Speed also implies distance and direction. In order to measure speed, an object must travel from one point to a different point.

At Collective Next, we’re not concerned with moving bodies through space over time. We’re here to help people and organizations move from one state to a different, more desirable state using collaboration. So when we urge our friends, colleagues, and clients to Go the Right Speed, we are not primarily concerned with the time it will take them to get where they want to go. What’s most important is understanding that they are on a journey. We are concerned with the distance they must travel, their direction, who’s going with them, the conditions they will encounter, and why they are going. We are concerned with the context and objectives of their journey.

In our world of collaborative problem solving, going the right speed is about awareness — awareness of much more than distance divided by time.