From Participation to Collaboration: Lessons from Public Art | Collective Next

We kicked off the year promising to deconstruct the process of meaningful change. And we noted that meaningful change requires designing strong and intentional solutions to address business challenges. Below is our third installment in our current series that focuses on how we support this design process through Collective Creativity.

Last year my 3-year old son and I responded to an open call to participate in an “interactive public art installation” at Philadelphia’s Kimmel Center. Upon arriving, we marveled at artist Shay Church’s towering “forest” constructed out of layered laths of wood filling the lobby. In the brief onboarding that followed we—along with about two-dozen participants of all ages—received gloves, aprons and the simple instruction: cover the “trees” with clay. My son cast aside the gloves and went to work.

Having seen Church’s work, I knew the applied clay would eventually dry, forming cracks over the whole of sculpture’s surface and creating an irregular pattern resembling tree bark. The beautiful effect would provide the installation with a sense of cohesion, and somehow my 3-year old would have contributed. 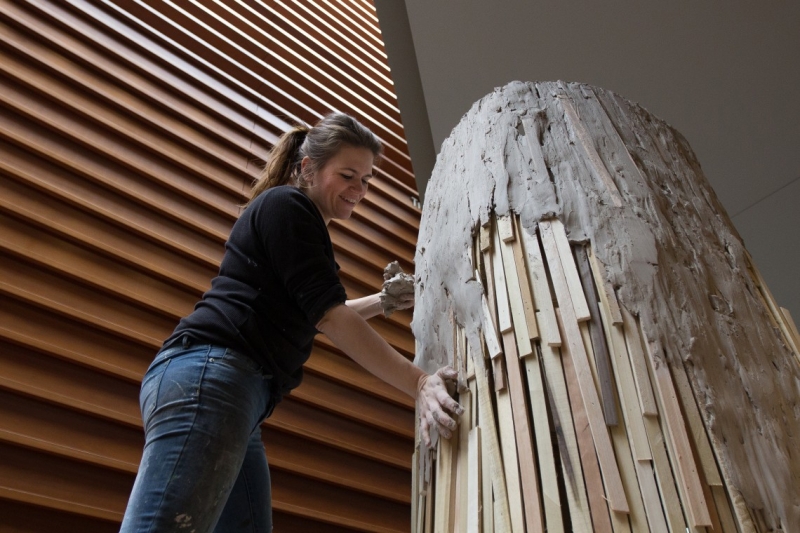 At the outset of this series, entitled “Collective Creativity”, we noted that collaborative creative ventures are built upon two central paradoxes: structure versus freedom, forethought versus spontaneity. As you struggle to determine the conditions that best facilitate collective creativity within your organization, the world of public art—even by 3 year old’s contribution—can offer fertile ground for considering the how, how much, and the why associated with inviting broader participation into the creative process. 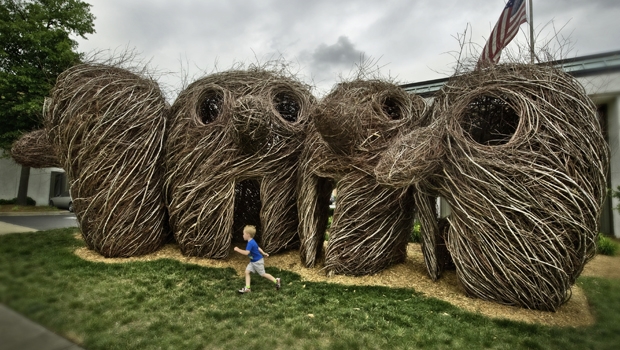 Historically, public works of art were designed to be admired at a distance. Think Michelangelo’s David or Rodin’s The Thinker gazing at you from a high pedestal. Beginning in the mid-20th century, artists became increasingly interested in inviting audience interaction with their public works. And this trend has accelerated over the past 50 years. Examples abound: Patrick Dougherty’s sculptural structures of sticks made for us to inhabit and play in; Antonin Fourneau’s Water Light Graffiti which beckons us to paint with water on banks of LED lights; Burning Man’s epic art installations that annually draw upwards of 40,000 people to the Nevada desert. Each of these works are predicated on participation and co-creation. An exploration of two recent examples of participatory public art affords us the opportunity to tease apart questions of participation versus collaboration, interaction versus co-creation, and intangible versus tangible outcomes.

21 Swings is a recurring public installation created by Daily Tous Les Jours a Canadian art collective. This playful piece consists of (that’s right) exactly 21 swings, like playground style swings. What is unexpected is that by swinging back and forth, participants generate individual musical notes. Groups of people swinging have the ability to co-create melodies. The artists have provided the public with the tools to create at will. The options aren’t limitless: we are given a fixed vocabulary (adding percussion by banging sticks against the frame is not encouraged), but one might argue that these constraints force even greater creativity. Important to note as well is that while the music is ephemeral, the sense of community, the experience of making something beautiful with a friend or stranger, along with the feeling of agency are more lasting. 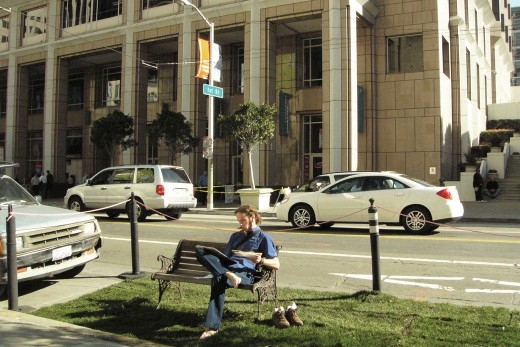 PARK(ing) Day was a single-site installation that went viral and turned into a global event. In 2005, the political art collective, Rebar, used sod, a bench, and lots of quarters to convert a downtown San Francisco metered parking spot into a mini park for the afternoon. The public became co-creators by bringing the park to life—resting on the bench, reading in the grass, sipping coffee in the sun. To date the public has brought its collective creativity to bear by using these temporarily converted sites for everything from wedding ceremonies to a free bicycle repair shop.

But the notion of engaging the public in the creative process has gone a step further. Park(ing) Day is now an annual event that takes place in urban contexts across the world. In response to hundreds of requests to reproduce their original project in other cities, Rebar decided that “rather than replicate the same installation” they would promote it as an “open-source” project. They created a how-to manual to “empower people to create their own parks…” Rebar has pushed the bounds of public involvement in the creative process by ceding control of the process itself, providing only guidelines. The results are obvious: a massive increase in the ability to scale the project, increased diversity of ideas and interpretations, and an increased sense of broad-based ownership among those involved.

So let’s return to my son and his clay and to the question of what all of this has to do with organizational leadership. For my 3-year old to be a successful co-creator requires significant structure and clear delineation of his role. But if you want members of your organization to join you in the creative process of developing a strategy, a new product, or a marketing campaign, it goes without saying that you will need to expand those boundaries or you will lose out. While the right balance will vary based on a given project, the goal is to establish a set of circumstances that inspires people to co-create freely and even unexpectedly while also directing this effort towards a specific end. It is of course crucial to determine the way in which your call to collective creativity is communicated: You must ask yourself, will your constraints come in the form of the tools or resources available, the set of givens provided, or a set of guiding principles? Are you seeking to achieve a lasting tangible outcome or to employ collective creativity as a means of community building? Once you’ve answered these questions for yourself—and consulted a collaborative public art installation or two—you’ll be primed to find the right balance between structure and freedom, forethought and spontaneity.