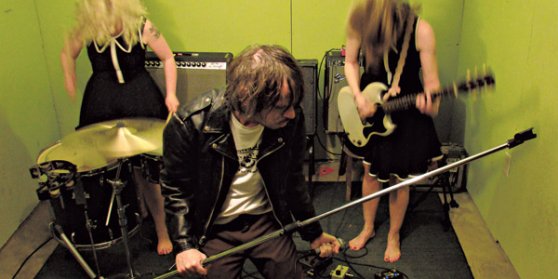 We’re in the collaboration business here at Collective Next: we practice it, we like it when we see it, we even like it when someone else sees it. Earlier this year, our John Colaruotolo wrote about a major collaboration he undertook outside of work, and today we’re shining a light on the extracurricular and very collaborative work of our creative director Erin King.

Erin is involved in quite a few intriguing outside projects (check out Girls Rock Campaign Boston), but we wanted to talk to her about her band The Monsieurs, which is releasing its debut full-length LP this week. If you go for unrefined punk or garage rock, the kind that’s as slick as sandpaper, you’ll love the record.

How did you wind up playing drums?

“After volunteering at Girls Rock Campaign (GRCB) four years ago, I was inspired that I could learn as an adult. I also wanted to hit things. So I went to Ladies Rock Camp three years ago [a version of the GRCB for adults]. It was a weekend, Friday to Sunday, with a show on Sunday night. I had no drumming experience before then. I know it’s a cliche to say something like that was life-changing, but it was. In that time I felt like I actually picked something up and I was confident about what I’d picked up. That confidence propelled me to continue, and by some lucky break someone asked me to be in a band based on that Sunday night performance. A girl I knew saw a video on YouTube of my performance and asked me to try out to be in her band. I didn’t know if I was ready to be in a band, but I went. The audition was terrible and nerve-wracking, but they kept me. We were all in a similar, formative place, and that made it a safe space, good place to build. I was in that band for a year.”

And what led you to The Monsieurs?

“My friend Hilken was in a band with Andy. They had a drummer and then a keyboard player, but it wasn’t working. Andy kept suggesting to Hilken that I join, but Hilken was resistant because we were close friends. Eventually she approached me. So I go to audition. They were working with a drum machine and wanted me to play along to it. I was very nervous, but it worked and they asked me back. At the next practice, I showed up and there was no drum machine. I thought I’d be able to hide behind it a little longer, but no. And, oh, they said, we have a show in a month and you have to learn five songs for it. We also had to find matching outfits.”

When did you feel you were contributing?

“After the first show, Andy said, ‘I just have 20 or 30 small changes to your drum parts.’ It was at that point that I was able to laugh and be human. It was like an icebreaker. My education took off at that point.”

“Here I’m an art director. I collaborate with clients, solution designers, and graphic designers. I’m not responsible for completing the end product all myself, but I concept and work with designers who can build on that concept and bring it to life. It goes the other way in our band. Andy gives me a part to play then we work together to take it where it needs to go.

One thing I like about drumming in The Monsieurs is that I have a small kit that I stand and play. Because I’m standing with my kit, I’m at the front of the stage, not hidden behind the singer and the guitarist. I’m closer to the audience and the three of us are aligned. It gives me a different viewpoint. There is something to be said about how having a limitation like a small drum kit forces you to be creative. Sometimes creativity is about eliminating options, figuring out how I can get the most sound out of two drums and a cymbal. Our best shows are when Hilken and I are in line, in a tight-knit cluster, not looking at our instruments but looking at each other, trusting one another. And playing as loud as we can.”

If you’re in the Boston area, you can see The Monsieurs here. Wherever you are, you can see them perform here.

TAGS: Collaboration, People of Collective Next
Back