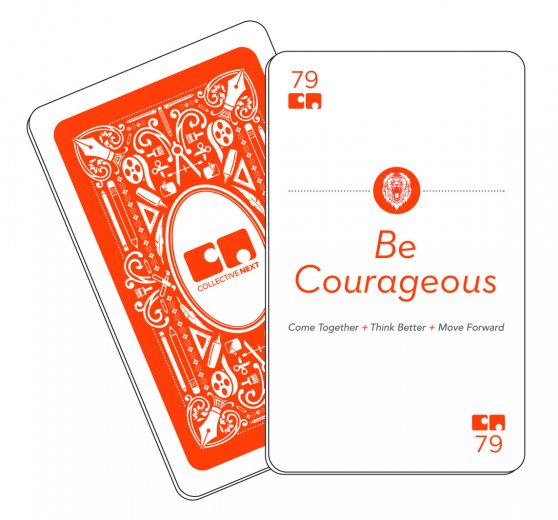 It’s hard not to think about the Lion from The Wizard of Oz when I hear the word “courage.” It’s a message reinforced continuously when we are little: Be courageous! As a parent, I often find myself telling my kids not to be scared, whether they’re trying a new sport, talking with a new friend, or touching a hermit crab for the first time. From a parent’s perspective, it’s easy to see how important courage is to your child succeeding in life. At times I get frustrated that my kids can’t see how silly their fear is and how much they will gain from taking one small step. I’ve also learned that most of the time their fear has more to do with anticipation than the actual action itself. The more they think about it, the harder it becomes to act.

As an adult, being courageous is just as important. Without courage, we become stale in our relationships, jobs, and life. We become complacent because we’re too afraid of failure to take risks or put ourselves out there.

When I first started facilitating, I was scared of what others would think of me in the front of the room. It wasn’t natural for me. I didn’t have an acting or teaching background and I was never taught presence. I’d been a math major at a technical school. I thought the easiest thing would be to copy others who I’d seen hundreds of times “performing” in front of the group. I felt uncomfortable and awkward. It just wasn’t me.

I had a great mentor at the time. As I often do with my kids, he really pushed me. Before I could think too much or second-guess myself, he would introduce me to a new situation. I may not have thought I was prepared, but that didn’t matter. He gave me no time for anticipation. Through this process, I learned a lot about myself. I learned that being genuine was key to my success. I also learned that I didn’t need to be perfect right away. It was more about taking the risk and learning. I realized it was a waste of time to compare myself to anyone else. It was better to focus on the connection I could make with session participants and gain confidence through practice and results. I made lots of mistakes during these first few years, but that’s part of being courageous. It’s about knowing that even though you may not be perfect at something, or even close for that matter, the upside is much greater than any risk of failure.

I would like to thank Chris Burke for being the mentor that had the courage to trust in me and who pushed me to be the facilitator I am today.