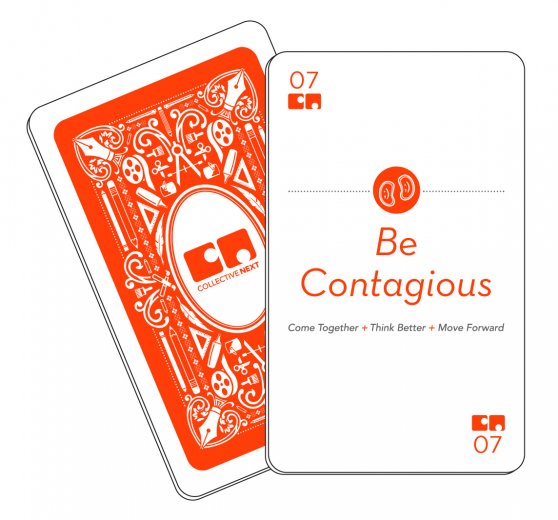 It can be fun to watch an idea or an image go viral, whether it being a cat doing something improbable, a striped dress of mysterious color, or something more worthwhile. But don’t leave viral communication to people with pets and way too much free time. You can be successfully viral in small settings, as well.

When we at Collective Next enter a situation, we want to present ourselves in a way that is contagious without being fake. If we want a client to feel optimistic about the future, we have to express, authentically, optimism about that future. If we want participants in an exercise to take it seriously but have fun with it, we have to model that balance of sobriety and silliness. Since we’re living in the Age of Viral Content, we scoured the Internet for lessons from viral content that make sense for people who want to be contagious in settings other than YouTube or BuzzFeed. So, to add to your palette, here are three ways you can make ideas and attitudes go viral across your team, throughout your organization, or just in the room that you’re in with your colleagues right now.

1. Viral content surfaces things people are interested in but don’t necessarily talk about. Much of what becomes viral is a slightly unusual spin on topics that are top of mind, but not top of conversation. They’re the subtext of what people talk about all the time, not the text. This can be particularly helpful to know if you’re trying to be contagious about solving a problem in your organization that everyone knows about but few address directly in group forums. If you have a possible solution to a difficult topic, an elephant in the room, people are more likely to pick up on it because it references worries people are having but not yet verbalizing.

2. People want to share viral content. People don’t just look at pictures of llamas on the lam; they want to be sure that their friends see it as well. So they share it, and on and on. If you intentionally model a particular behavior in a meeting or a session, that behavior is more likely to spread across the room. It can be physical. If you cross your legs, other are more likely to; if you smile, you are more likely to provoke smiles in others. It can also work in more abstract ways. Bringing up a difficult topic in a nonconfrontational way is a proven way to make others in the room more comfortable addressing that topic.

3. There’s not that might work involved. Social networks succeed, in part, because sharing is so easy. Acting when someone else has decided to Be Contagious isn’t as easy as pressing a “Like” or “Retweet” button, but having more than one person agreeing that a topic or an approach is worth acting on makes it easier for other people to join in. No one has to do it by himself or herself. As with viral content, everyone is invited.

We hope the changes you want to make in your organization are more weighty than introducing a quiz about which Hilary Duff character you are (yes, that’s a real thing; no, I won’t link to it). But some of the same criteria that make something viral on the Internet can make what you do more viral at work. You can Be Contagious in a good way.